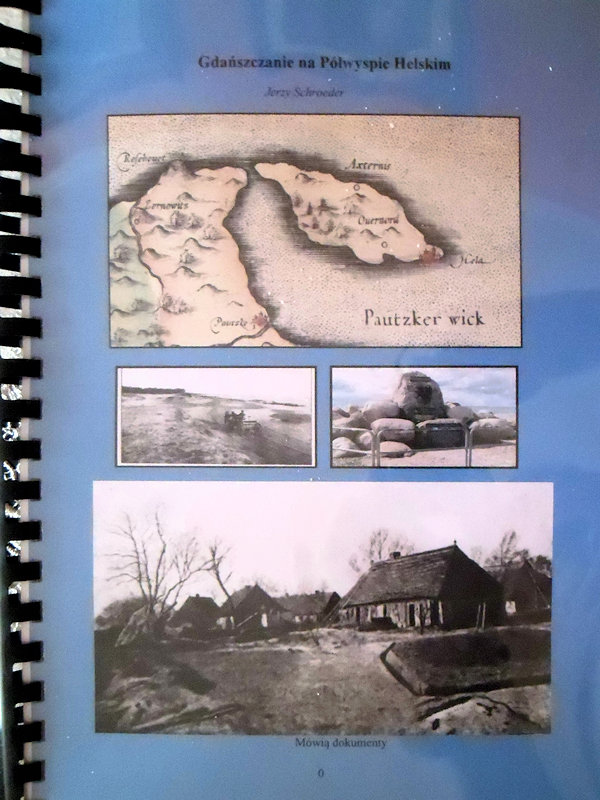 We are very pleased to present a very special book project here: Gdańszczanie na Półwyspie Helskim or, in english, Gdansk on the Hel Peninsula. It is an excellent collection of material and depiction of the history of Hel Peninsula. Mainly it concerns the villages of Jastarnia, Kuznica and Chalupy in the 20s and 30s of the 20th century, but it gives also attention to the history of the town of Hel. A very successful addition to the previous historiography of Hel.

About the author: The author Jerzy Schroeder lives in Puck on the Gdańsk Bay. As an amateur historian, he has dedicated himself for years to the local and family history of the Hel Peninsula and has now summarized his work in a book.

If interested: The book is written in Polish and contains about 360 pages with numerous illustrations. If you would like to buy a book copy or support the book project, please write to: Diese E-Mail-Adresse ist vor Spambots geschützt! Zur Anzeige muss JavaScript eingeschaltet sein!. All emails will be forwarded directly to Jerzy Schroeder. Please write in English or Polish.

Disclaimer: The responsibility for the contents of the book excerpts lies with the author and not with the operators of this website.

This is how the author himself describes his work:

I am pleased to introduce my new book to you. It is about the unusual story of families who have lived for centuries on the peninsula of Hel on the southern Baltic coast from fishing. Among other things the uniqueness of their history is based on their roots which go back to Scandinavia, Jutland, Northern Germany, the former territory of the tribe of the Veneti (Wends) and also to the Gdansk of the 12th century. It is worth noting that on the peninsula for centuries only a few dozen families lived with well-defined, almost hermetically delimited family circles.

In the course of time, as in all societies, there were changes in various spheres of life – in this social group as well. Moral, ideological and linguistic similarities, which in the broader sense expressed a certain sense of responsibility for the members of the entire community, understood in the broadest sense as human solidarity, survived. Visitors entering the sandy area of ​​the peninsula encountered a harsh natural environment that demanded extraordinary willpower from the people living there. These harsh living conditions have led to a distribution of roles between men, women and even children.

Nothing could shake their will – they remained on this narrow piece of earth. They made everything that was necessary for life with scant resources. They built huts made of reeds, wood and flotsam. They made simple tools for their work. In a form of grassroots democracy they chose their leaders. They had to suffer violent intruders of various origins: raids by the Vikings, pirate raids and crews of changing alliances in the Nordic and Napoleonic wars. They died in the waves of the sea, because that is the peculiarity of coastal and sea fishing. Centuries passed, and newcomers, mainly from Gdansk, made Hel Peninsula their home to this day.

This book refers mainly to documents from the interwar period of 1920-1939. The restoration of the Polish state led to a change in various aspects of social and economic life. It can be said that the composition of the inhabitants changed in favor of a new nationality that did not exist there before. It was proceeded according to the well known method from the parlour game "The winner takes everything". The continuation of this method took place 1939-1945.

In my book I have tried to avoid opinions and to follow the method of "speaking sources".